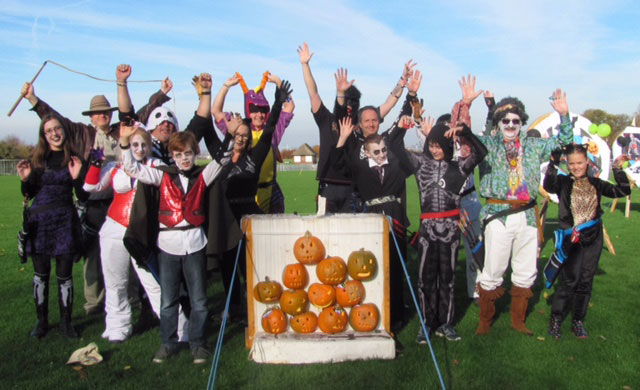 "They came at us from all sides. Shuffling toward us with menacing, lifeless stares from their undead eyes. First one or two, then more, until finally a whole legion of zombies, vampires and foul creatures were ranged before our eyes."

No, not the latest episode of The Walking Dead - that was an eyewitness account of the turnout for this year's CMO Halloween Fun Shoot which was nothing less than spook-tacular! (Don't worry, there'll be a load more awful puns to come).

Where else could you get to see Dracula and Son of Dracula standing next to the ghost of Jimi Hendrix, firing arrows at a Zombie Field Captain? (You can't - I've checked).  And what a beautifully sunny afternoon to conduct such foul business. 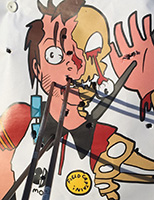 As ever the fiendish scoring system was as random as picking sweets from a bag so even if you managed to nail the undead between the eye sockets, your fortune could turn at the flip of a Bounty Bar. It was enough to drive you batty (I did warn you).

Between rounds, we all took to the field to practice our "Undead Shuffle" as we scoured the grass for lost arrows. Not a good day for earthworms.

Afterwards we retired to the pavilion for the prize-giving where Grace, Julie, Jarad and Fadil picked up goodies for bagging the most baddies, and Hayden and Barry won in the fancy dress category for being the best-dressed worst.

Then it was time to feed on a stunningly good ghoul-ash (sorry, last one I promise) before carriages, coffins and broomsticks.

A fang-tastic (ok, I lied) fun shoot as ever with our many thanks to Andre and Grant for organising and to everyone who helped on the day and who made food including Rene, Kate and Veronique.

We look forward to the next fun shoot at Christmas.